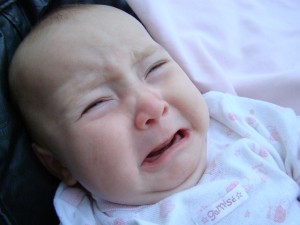 When it comes to riding trains, I’m still a little boy. I love the high-speed trains that speed through the French countryside.

The other day we were going somewhere on the Eurostar and our seat was right behind two ladies and a baby. A loud baby. A persistant baby who wasn’t a contented camper.

Have you ever noticed that when a little one is not happy he has ways of letting you know? He screams, turns red, throws a fit and keeps it up until everyone else around him is wondering why that woman was allowed to give birth (except we’re patient because we’ve all been there. It’s happened to us, too).

Now unhappy adults communicate their emotions more subtly. They scream, turn red, and throw a fit. Some of them anyway.

We’ve got our grown-up ways of throwing tantrums that are even more uncomfortable for others, don’t we? For instance:

Big chill in the room–

Her: “Nothing is wrong!”

She leaves the room, slamming the door.

One man said he got mad at his wife and for a whole week he slept as close to the edge of the bed on his side as he could. It wasn’t very comfortable, especially when he realized at the end of the week that she didn’t even know he was angry.

Bosses may stomp and growl. Teenagers pout and make terrible faces (At the end of this article, see what happens to Calvin, of the Calvin and Hobbs’ comic strip, when his face freezes in a nasty expression).

The way we express our tantrums depends on the place the person who inspires the tantrum occupies, and the price we must pay for our antics.

For instance, is expressing our unhappiness worth a three-day cold front moving through the house? Or getting fired?

Or abuse from another person who is mean?

Are there any of my esteemed readers out there who never get angry or who never try to manipulate others by their actions?

Yes, I see that hand. You can put it down now because I don’t believe you.

Frankly, acting like a baby, even if it’s the tactic of a 40-year old manipulator, grates on my nerves (except when it’s me who is doing it).

Here’s How To Do It

Let me give you some advice:

2.     Express your frustration in an adult manner. Find a way to talk about it.

This is a foolproof method for dealing with the unhappiness and frustration which comes from  not getting your way.

Step number one is fairly easy.

Just don’t waste it. Save your “mads” for something that merits a “mad.” Otherwise you’re just a hothead.

Point number two gets a bit iffy when you’re still boiling. Give the other person time to cool down (and yourself).

It’s especially important to talk and work towards peace if the same issue crops up often. Some tumors have the potential to become cancers. You need to get it out and operations can hurt. Just make sure you do surgery with a surgeon’s scalpel and not with a hammer and a hacksaw.

Number three isn’t as easy as it should be and that’s our fault. Have you ever noticed how wonderful it is to be “RIGHT!” when someone wrongs you?

Get over it! It’s not worth it.

Babies monopolize your attention when they cry and cry and cry. There are times that I suspect they cry just because they like it.

At some point, though, it becomes counter-productive. You may get your way but the loss of respect and love of others isn’t worth it.

A few days after the baby episode, I got on the train again. As I settled into my seat I heard, “Meow, meow, meow,” repeated several times. Some fellow had his cat in a cage on his lap.

Let’s grow up and become adults. It will be much easier on my nerves.

“If someone else has abused you in the past, it’s okay to give them credit for fouling up your past, but do not give them permission to ruin your present and your future. Take control of your thoughts and your future.” Roger Lewis

You know what happens when a duck flies upside down? He quacks up. (Groan)

Did you hear about the glasses-maker who fell into his lens-grinding machine? He made a spectacle of himself.