Phyllis and I had a memorable experience about eight years ago when her heart, like the children of Israel, began to murmur.

Actually, it had murmured for a long time because the problem was a heart valve that was not quite right from birth. Since she’s a bit over 30, it had beat quite a few times and was wearing out.

Nice French surgeons replaced her heart valve with a valve from a calf. It has worked well. The only secondary effect she’s had is that when she burps she goes, “moo!”

Well, that’s all true but the “moo” part.

The truth is that she had a “time bomb” inside her chest and if she hadn’t had the valve replaced she might be dead now.

A hurt from the past.

Lots of us have “bombs” inside. They hurt and they change the way we live. Those pains from the past indicate something in us that must be dealt with if we’re going to live without limping.

Our pains from the past come from all kinds of sources—Secret abuse. Poverty that makes you feel less than someone else. Broken relationships. Comparison. Parent’s anger turned towards us. Parents living out their life through us. Parental clashes. Family disasters—job losses, major sicknesses. Racial prejudice.

Often it’s an inferiority complex that doesn’t seem to have a definite source. Many are born feeling this way.

And words! A friend was raised by her grandmother. She often heard, “You’re going to be just like your momma!” That wasn’t a compliment.

I don’t think these interior bombs are anything new. The more I study the life of King David the more I think there was something in his childhood that was painful. Some speculate that he was an illegitimate child (Ps. 51:5).

When the prophet commanded David’s dad to present his sons, he didn’t even call for David (1 Samuel 16:11). Why would he leave him out? His dad overlooked him as unimportant or maybe shameful. His oldest brother seemed to despise him. (1Sam 17:28-30). Did his birth bring shame on the family?

Some people react to rejection by living out the low opinion that others have of them. Yet David did the opposite. Shepherding wasn’t the most respected job on that society’s totem pole but David became the best shepherd he could be.

Everything he did, he did with excellence, with all his heart. God’s hand was on him and he became the “shepherd” of a nation. He led that nation to heights they had never known.

Everything David did proved those who doubted him WRONG!

That “time bomb” within him still ticked, though. And it eventually went off. Why would a man with too many wives steal someone else’s wife? Was he still searching for that love that his family never gave him?

Was that part of why he still loved his wicked son Absalom desperately, even after the arrogant young man tried to kill him and take his throne?

David was an incredible poet, musician, warrior and statesman. When you read some of his psalms, though, you suspect he may have struggled with depression.

How about you and me? Do we ever struggle with deep-seated pain from long ago?

How do we stop the hurt? Ostentatious materialism tries to cover the shame of the self-made man who grew up dirt poor. We shower stuff on our kids so that they can have what we didn’t have, but wanted.

Depression. People-pleasing. Looking down on others. On and on the negative solutions to pain continue.

What is God’s solution/healing for this?

First, see the problem. We don’t need Dr. Phil to tell us. The Holy Spirit probes deeply in us and shows us what He finds.

The we deal with it in God. Ground zero for David was his relationship with God. That’s why he didn’t fear Goliath. That’s why he acted in faith all through his life. David fell on his nose numerous times, but he always got up and dealt with it before God. Devour the Word. Pray. Pray with a prayer partner.

We need to realize that this may be something we battle our whole life. That’s not necessarily bad. We prefer a “one zap” healing and God does that sometimes.

Often, though, He does an “over-time healing.” I’ve noticed that there are victories that I win once for all and others I must win once every day. I prefer the first ones but I probably grow more through the “once every day” victories. By these, we understand different facets of what’s hurting us and they allow us to help others who are where we’ve been. Often that hurt we felt inspires us to do something to help those who hurt like us.

Some victories I win once for all and others I must win once every day.

John Piper said, “(Jesus) turned (Peter) around and forgave him and restored him and strengthened his faith. And now it was Peter’s mission to strengthen the other ten. “And when you have turned again, strengthen your brothers.”

Get help. Talking does help if you talk to the right people. Some are expert at defusing bombs. If you’re like me, write! My brain flutters like a batch of butterflies but writing down what’s going on inside helps me. Sometimes when I can hardly pray, I write my prayers. Sing! God doesn’t mind if your singing sounds more like braying. He comes and maybe He even sings with you.

Make a plan and follow through. Some get counseling and it does no good because they say, “Yes,” then continue to live the way they always have. Allow God’s Spirit to change you. Make it a priority.

Refuse a mediocre life or a life of hurting others. Believe that God is healing you.

Disarm that bomb and enter into the abundant life the Lord gives.

“A transition doesn’t have to be a crisis, unless we want it to.”
Seth Godin

I had a friend in college who hardly ever washed his socks.

Overall he was a clean fellow but he wore his socks so long that he could stand them in the corner when he took them off instead of laying them on the floor (slight exaggeration).

Now, before you criticize, remember that we were young men between women. We had left our mothers behind and we hadn’t yet found our wives.
So obviously, there was no one to wash our clothes. Obviously.

(I see you, young ladies, there in front of your computer screen. Angry smoke is puffing out of your ears. “Why should they expect their mothers or wives to wash their clothes? They should do it themselves!” I love it!)

Anyway, chauvinism aside, you could get away with stinky socks as long as you kept your shoes on. In the dorm room at night, though, no luck for your roommate. Since a lot of us were in the same fix, the smell of one pair of feet might have canceled out the smell of the other pair of feet.

Of course, if the smells got together the results were devastating. END_OF_DOCUMENT_TOKEN_TO_BE_REPLACED

Once upon a time there was a little green man. Actually green has no bearing on our story. He could just as well have been purple. But, he was green.

Our green buddy made friends with everyone around him and every one commented on what a fine fellow their avocado-colored neighbor was. Until one day …

Yes, one day someone did something horrible to our green friend and it took him a long time to get over it. I’ll spare you the details because it wasn’t pretty. Eventually he healed, or seemed to anyway. Somehow he wasn’t the same–more distant, smiled less, and stayed to himself. END_OF_DOCUMENT_TOKEN_TO_BE_REPLACED

We were playing one of the top teams in the state and they were killing us. Actually “killing” is too mild to describe the massacre. For some reason I was playing linebacker. The Rattlers (the other team) had ripped a hole in our defensive line and suddenly I found myself with nothing but air and five yards of grass between my skinny 15-year old body and their all-state running back.

He was big, fast and ugly (maybe not ugly but that sounds good with the other two). I felt like a daisy in front of a charging bull as he powered towards me, bent nearly parallel to the ground. My life flashed before my eyes. My best hope was that some people would at least cry at my funeral.

Suddenly from nowhere, one of our defensive backs, senior Mac Hubbard, slashed in from the side and smacked him down. I may have pranced around afterwards like I had done something or maybe I even piled on a bit. I don’t remember. But, I knew the truth: I was a goner if Mac hadn’t saved me.
So, I’m 49 years late with this but, “Thanks Mac. I really appreciate it man.” 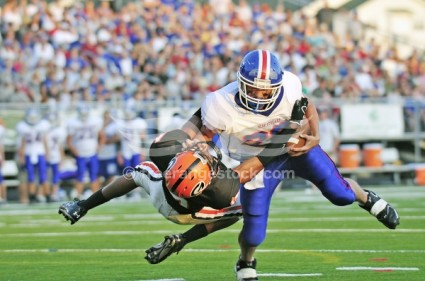 Recently, I asked you to tell me what kind of questions you would like to ask of God. Some of your subjects made my eyes

cross as they are the questions I ask myself.

One sore point that came up quite often was God’s healing power. I’ll be frank with you. This week I had a hard time finding anything funny to say because I know that so many are hurting while they long for healing (and also because it’s Monday and I squeezed the last drop of “funny” out of myself yesterday).

One reader, Bruce, shared his heart. “The number one topic I would like to discuss with God would be physical healing. Why aren’t more people healed?  How many people do we need to “enlist” to pray for a sick loved one, or is the sincere prayer of one parent for their sick child enough?  Are we convincing God to heal one of His children when we pray?” END_OF_DOCUMENT_TOKEN_TO_BE_REPLACED