A little boy is trying to sell an old push-style lawn mower.

The motor refuses to start.
Finally the pastor says, “This lawnmower won’t start!”
The little boy replies, “You gotta cuss it preacher.”
The man replies, “I’m a pastor. I haven’t said a cuss word in eighteen years.”
The boy answers, “Just keep pulling on that cord. It’ll come back.”
Some situations (and people) just bring the worst out of us, don’t they?
Last week we gave you three of our seven suggestions to help you break out of your prison of anger:
1. Put a limit on your anger.
2. Get healed.
3. Make a conscious decision to obey. 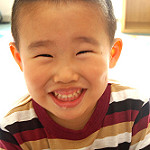 Here are the rest:
4. Do What You Can To Solve the Problem Causing the Anger. If it means an “adult confrontation,” we need to get at it. I say “adult confrontation” because so many act like four-years olds when they are in emotional situations.
A brawl broke out between the St. Louis Rams football team and the Dallas Cowboys, during a pre-season scrimmage together. Fights between players erupted all over.
Coaches had to end the scrimmage. Afterwards, one of the Cowboy players commented, ““It’s just football, man. We’re grown men. Whatever happens, happens.”
Adults?
Unfortunately, that’s the attitude many people take about confrontation.
The Bible commands us to speak the truth in love. I don’t believe we have the right to speak the truth until we can do it in love.
—Pray. Try to honestly allow God’s love for the other person fill your heart. When they begin to insult, accuse, criticize, lie, etc., you can keep your cool.
Usually it’s not like that, though. People have a tendency to mimic our actions towards them. Most times when we HUMBLY talk to someone about a problem, the problem gets resolved. Or at least we can agree to disagree, and that’s a big step forward.
Don’t let your conversation descend into a contest between Sumo wrestlers to see who wins the debate or who gets their way. Try for a solution that lets both sides win.
5. Sometimes we must decide to move on. We love and appreciate each other but somehow, when we’re together there are always fireworks.
Moving on is kind of sad, because in a sense it’s giving up and accepting second best, but sometimes that’s the way it is.
There are people who were super friends—until they worked together.
Paul and Barnabas were great friends and for a long time, excellent co-coworkers. But, their ministries had both evolved to a point where they couldn’t work together and remain true to what each felt God was calling him to do.
Attention: this doesn’t apply to marriage. Marriage is a powerful picture of the relationship between Christ and the Church. In marriage we’ve got to find a way to forgive, stay together, and pick the lock of the anger prison.
Pray like crazy (in faith) and seek help for your couple.
God will give special grace so we can do it. Unresolved anger explodes a marriage like an airstrike from an F-16. The results aren’t pretty. Find a way to get rid of your anger and move back into love.
6. If you can, stay out of situations you know will make you mad. For instance, my wife and I don’t usually put up wallpaper together. We have two different philosophies for the job. My philosophy can be resumed in one word: “fast.” Her philosophy is two words: “almost perfect.” Can you see a potential for conflict?
7. Choose joy. Recently, I started to get mad again about something that has been bugging me for a while. I could see, though, that I had a choice (people in prison don’t have a choice).
I could choose anger, and stew and sputter once again against all those injustices I had to put up with.
Or I could choose to be joyful.
Mentally, I compared the state of my insides when I was mad and how my innards felt when I was joyful. I chose joy. As a matter of fact I had to choose joy several times that day.
But, I did it.
Certain emotions can’t co-exist. Anger and joy for example. You can’t constantly be mad and at peace, or mad and full of faith and confidence.
Here’s one of the great dangers of anger: when it sets up housekeeping it settles down like a fat hen on her eggs. The eggs warm up all right, but watch out when those things hatch!
Can I pray for you? Lord Jesus, some of your kids are locked up tight in a prison of anger and hurt. Please break their chains, heal them, open their prison door, give them someone wise to talk to, and restore to them the power to choose peace in their mind in You. Amen.
Hmmm …
It’s rare to find a consistently creative or insightful person who is also an angry person.* They can’t occupy the same space, and if your anger moves in, generosity and creativity often move out. It’s difficult to use revenge or animus to fuel great work.
Seth Godin
Photo: Flickr, Creative Commons, David Lendrum lawn mower 2; Foreign Imagery  JOY